A fun day seeing the sights in the center of Amsterdam.

We arrived at the Gare du Nord train station early and traveled by high-speed train to Amsterdam. 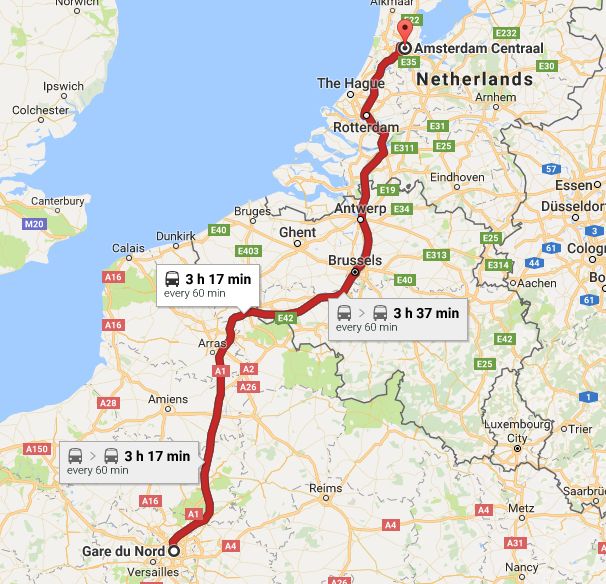 A rushed cup of coffee and we were quickly whisked by cab to the Gare du Nord train station to catch the high-speed train to Amsterdam. Train travel is a comfortable, efficient, and affordable mode of transportation in Europe with trains going virtually everywhere. Our train traveled at about 150 MPH and the trip took a little over 3 hours with quick stops in Brussels and Rotterdam.

Outside the huge Amsterdam train station were thousands of bicycles in extensive bike racks. We saw people towing suitcases behind their bicycles, so apparently many people ride their bikes to the train station. We learned that bicycles outnumber people and cars in Amsterdam by a lot!

After some minor issues with our train station to hotel transfer and with our reservation, we checked our luggage and walked to nearby downtown Amsterdam. We quickly learned to stay out of the bike lanes to avoid being run over and joined the tourist throngs walking through the colorful canal-lined streets.

That evening, after checking into our room, we walked back downtown where we enjoyed a red light district tour and saw the other side of Amsterdam. Girls in the windows, cops on horses breaking up disturbances, and many many other things fill my memory but photos were not allowed in most places so use your imagination. It was a pretty lively area indeed.

Lots of fun things to see all over Amsterdam with distinctive architecture all around and many houseboat lined canals. We sampled some locally brewed Heineken beer and some very nice local wines. I know it would be a sacrilege to some of the foodies we know, but we had lunch at Maoz Vegetarian, which offers great U-build-it falafel sandwiches for less than 5 Euros. We had discovered this chain of vegan fast food restaurants in the the Latin Quarter of Paris and I was thrilled to also find one in Amsterdam within walking distance of our hotel.